Once again, life has deterred me from keeping up with my posts. I had a sick toddler for a week, then I got sick, and then Snowpocalypse 2015 hit. It’s been busy. But amidst all of that, here’s what I can be thankful for….

Day 38:
Now that Bella is getting older and understands and communicates more, I love our outings together. Today, we went shopping for some new appliances for the new house. While we were out, we also went and had lunch at Chick-fil-A. Just a fun girls day out and about (and apparently, very tiring). 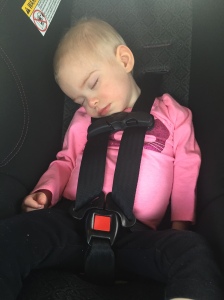 Day 39:
So a few days ago I watched a documentary on Netflix called “Vegucated,” which was about a 6-week challenge for 3 folks to try the vegan lifestyle. It was very eye-opening and really got me thinking. I’ve always been health-conscious, so I am always open to trying healthier options. That being said, I don’t know that I could ever go vegan or vegetarian indefinitely, as I do actually enjoy meat. But I am capable of eating vegetarian meals, or even going through short spurts of being completely vegetarian. In an attempt to try some new plant-based protein options, I bought some tofurky and soy burgers and what not on my latest grocery trip. I was amazed at how easy it was to find quick-serve options at even the local Walmart. So today I am thankful for how far we’ve come with vegetarian and vegan items, that they are easily accessible even in smaller towns where I live and without going to the local “health foods” store.

Day 40:
Today I got a call from Bella’s daycare that she was running a fever. Blaine had practice, so he couldn’t go get her. Fortunately I was able to get out of my afternoon meeting to go get her. Today I am thankful that I have a relatively flexible job that still allows me to be there for Bella. 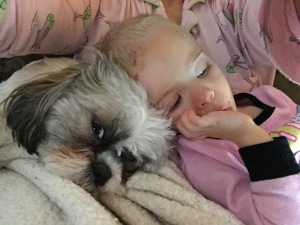 Day 41:
Bella’s fever got pretty high last night. Actually, perhaps the highest ever – 104. Though she acted like she didn’t feel well, she did still have bursts of activity, and she was eating and drinking just fine. I wasn’t sure at what point I should be concerned enough to take her to the ER. I ended up calling a nurse line, who gave me some helpful tips on how to keep her comfy and signs for which to watch that would signal an emergency situation. She slept with me overnight, and by morning, her fever was back down a few degrees and she was acting normal. So today, I am thankful that things didn’t escalate enough to warrant a trip in the night to the ER.

Day 42:
Bella’s fever spiked again in the night, so I ended up having to stay home with her again. Today, I am thankful for not one, but TWO, awesome teammates who were willing to cover my shift in the store so that I could stay home with Bella. I am also thankful that I was able to get some work done from home. 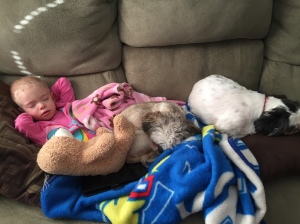 Day 43:
Bella’s spurts of activity became non-existent and her appetite disappeared – signals I was waiting for to know that this was turning for the worse. So I took her in to the doctor this morning, and we found out that she has a sinus infection and the start of an ear infection. She was prescribed some antibiotics, and I gave her a dose immediately. Less than 12 hours later, she was up and running again. Today, I am thankful that Bella is on the mend. I am also thankful that Blaine was able to stay with Bella tonight so I could go into work for a few hours.

Day 44:
We had our inspection on the new house today. We waited with bated breath to get the results, as we were certain the inspector would uncover something HUGE – hence why we were getting such a great deal on the house. As it turns out, he found only minor things that Blaine and his rental renovation crew can easily repair. The biggest issue uncovered was radon detection – levels at four times the “allowable” level. (If you don’t know about radon – where it is found, what it can do, and how to repair it – I highly suggest looking into it. This is my new PSA mission, as I learned it is the second only to smoking for the leading cause in lung cancer!) Anyway…as scary as that sounds, it is also easily repaired with the installation of a mitigation system, which we intend to get. So today I am thankful for a good inspection on the new house! 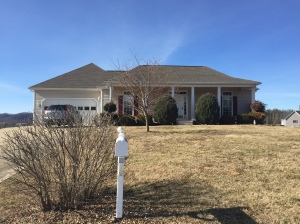